The following article was published online on June 26, 2020 at https://www.forbes.com

Rare earth elements (REEs) are a hot topic right now, since they’re in high demand for defense and high-tech applications, but almost entirely sourced from China. There’s stiff market and government pressure to break the U.S. free of China’s stranglehold over these vital minerals. In an earlier article, I highlighted the current state of play and potential paths forward. One company I mentioned in that piece, MP Materials of Mountain Pass, California, claims to offer our best and fastest path toward domestic production of these vital metals.

That minority ownership stake by a Chinese firm has led to unfortunate disinformation about the company. For example, there was a recent report by The Japan Times that the U.S. Department of Energy (DOE) had instructed its scientists not to work with the company because of that affiliation. But that report is false. “The Department of Energy does not have a policy ‘blacklisting’ MP Materials,” said DOE spokeswoman Jess Szymanski. “To say so is inaccurate and a mischaracterization of the Critical Materials Institute Interim Director’s comments. The research and development of rare earth elements and collaboration with industry in this area remain high priorities for DOE.”

One part of MP’s claim that is indisputable is that they’re the only existing domestic extractor of REEs. Their Mountain Pass mine is indeed the sole American rare earths source currently in operation. MP has been operating it since 2017, and produces a rare earth concentrate product that amounts to in excess of 36,000 tons of rare earth oxide equivalent per year (or 15% of world rare earth market demand). The mine first opened in 1952 and was a strong domestic producer throughout the second half of the 20th century, but overseas competition and ever-increasing regulatory hurdles forced its closure in 2002. The mine was reopened about a decade ago by an investor-led company, Molycorp Inc., but they went bankrupt in 2015 as a result of operational challenges and subsidy-supported REE price undercutting by China.

Now MP says they’ve got the answer to profitability. “We have an 8% concentration of REEs in our ore, one of the highest in the world,” said Jim Litinsky, MP’s Chairman. “We are the second largest producer in the world today (and largest outside of China), and, even with all China is doing, we’re still profitable. We’ve already proven that we’re a stable, economic source of supply.” The company currently has some 200 employees working at the Mountain Pass mine.

Having that domestic REE source has become an ever-greater priority in the past year. Chinese President Xi Jinping hinted at banning exports of REEs to the U.S. in May 2019 as retaliation for the trade war. More recently, China’s bad behavior and multiple supply chain problems related to the coronavirus crisis fueled a growing chorus calling for U.S. trade decoupling. For REEs specifically, China’s threatening behavior has led to both Congressional mandates as part of their defense reauthorizations, and administrative guidelines via Presidential Determinations, to source the critical metals from more reliable partners.

But the REE sourcing situation serves as a microcosm of our overall supply chain for manufactured goods, and the reality is that decoupling will take years (if we even have the wherewithal to make it happen at all). “A multi-billion dollar supply chain doesn’t move overnight,” Litinsky pointed out. While MP is indeed the only game in town for existing domestic extraction, the fact is that right now, 100% of the REEs they mine are sold to China, where they are further processed, refined and manufactured into critical high-tech products such as magnets and batteries. The reason for that is simple: there is no existing domestic capability for that post-extraction production.

MP is already working to address that situation. The former Molycorp assets they purchased at Mountain Pass included REE separation equipment, which is used to divide the intermingled multiple elements into individual REE components. Those systems as originally designed didn’t operate economically. Litinsky pointed out that in this case, technical know-how flowed into the U.S. rather than out of the country thanks to their Shenghe partnership. As a result of that collaboration, the systems are being upgraded to perform competitively. The company’s current goal is to have that part of the operation up and running by the end of 2021. At that point, as a Trump administration policy aide pointed out for my earlier article, the front end of the supply chain is secured.

Meanwhile, the company is moving forward with plans to build another plant to further refine the separated REEs into refined metals. It’s MP’s eventual goal to produce magnets domestically as well. 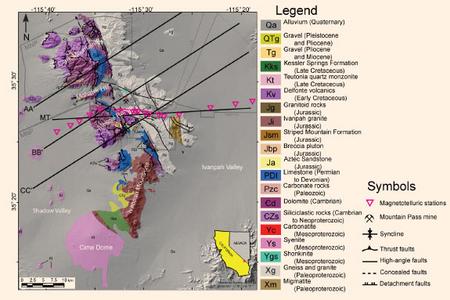 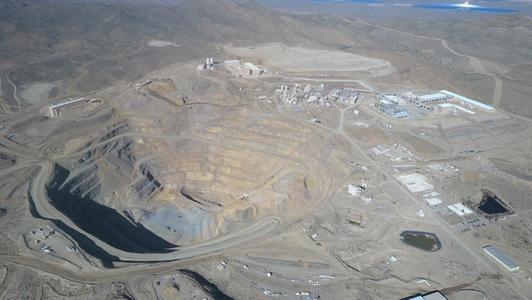 And the good news keep on coming, a team of researchers from the U.S. Geological Survey has mapped a rare earth element-bearing deposit in the Mountain Pass region of the eastern Mojave Desert. Our claims are located there!
The findings were published in the journal Geosphere in December 19, 2019. The research article states: “In the Mountain Pass, California (USA), located in the eastern Mojave Desert, hosts one of the world’s richest rare earth element (REE) deposits.” Read the full article here.

The importance of Rare Earth Metals is crucial to our way of life because of their high tech applications, please follow these links for more information: 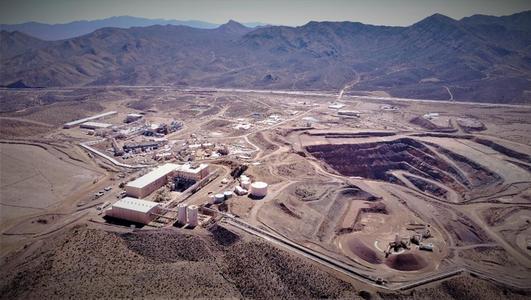 The following video features Brian Sullivan at the Mountain Pass between California and Nevada, reporting about the great importance of Rare Earth minerals, this aired publicly in the Nightly Business Report produced by CNBC.

For information write to: emmining@cox.net

Fujian-based Zijin Mining, whose chairman Chen Jinghe made his name developing the company’s copper and gold mine in eastern Fujian province, has emerged as one of the country’s most acquisitive mining companies.

Last year Zijin completed its $1.4bn acquisition of Canadian miner Nevsun Resources, which owns the Timok copper mine in Serbia and the Bisha copper and zinc mine in Eritrea.

The Chinese miner’s offer in September was at a 57 per cent premium to Nevsun’s share price at the time, and was almost a third higher than a rival offer by Canada’s Lundin Mining. Zijin had also won over Serbian authorities by earlier agreeing to spend $1.26bn to buy a stake in a nearby smelter in return for a 63 per cent stake.

Zijin has surprised western bankers before with its ability to do deals. On the same day in May 2015 that it announced a partnership with Canada’s Barrick Gold, it also bought a stake in Canadian Ivanhoe Mines’s copper project in the Congo.

“Not many entrepreneurs have his expertise and vision,” said a person who has dealt with Mr Chen.

Ivanhoe is developing the Kamoa-Kakula copper deposit in the DRC, which Bernstein has said is the “single greatest discovery of copper in at least the last 30 years”. It also has exploration licences near the deposit, where it has also found copper.

“In the long term, considering the basic demand for copper from urbanisation in emerging economies and the additional demand from emerging industries such as electric cars and clean energy, there is more certainty in the outlook for the copper industry compared to other metals,” said Sun Yufeng, president of Citic Metal. “There is likely to be a deficit of copper around 2024.”

Chinese companies are likely to continue their acquisition spree this year, according to bankers, especially in riskier countries such as the DRC. The Congo holds some of the richest resources of copper and cobalt in the world.

Last week China Molybdenum, a miner backed by Chinese billionaire Yu Yong, spent $1.4bn to strengthen its control over a giant copper and cobalt mine in the DRC, following its initial purchase of a majority stake from US miner Freeport-McMoran for $2.65bn in 2016.

“In this market it would be hard for a western mining house to be able to defend itself against buying something at the riskier end of the spectrum,” said John Tivey, a mining lawyer at White & Case in Melbourne.

“They would have a lot of trouble with their shareholder base. I think that contributes to why Chinese groups are able to be a little more strategic about their investments — they don’t have the overhand of activist shareholders.”

However, one sector where M&A activity looks set to increase for western miners is gold. On January 1, Barrick Gold completed its $6bn all stock merger with London-listed Randgold, while last week, US miner Newmont made a $10bn bid for rival Goldcorp.

John Thornton, the chairman of Barrick, has also pledged to do more deals with Chinese partners such as Shandong Gold.

Chinese miners are likely to be more competitive in deals where they can ultimately control the mine, rather than joint ventures, according to Richard Horrocks-Taylor, global head of metals and mining at Standard Chartered.

Last year Chinese state-owned miners Minmetals and Chinalco lost out in bids for a 30 per cent stake in Teck Resources’s giant QB2 copper mine in Chile, which was bought by Japan’s Sumitomo for $1.2bn.

“Our strong view is that the Chinese will continue to do deals. They will continue to be a key driver of M&A activity in the mining sector as the western diversified [miners] remain cautious,” said Mr Horrocks-Taylor.

GREAT NEWS! One of the most important mining operations in the world is just an hour's drive from Las Vegas, NV. The following article from Channel 3 News Las Vegas aired with Tom Hawley on 8-22-2019 – Battle for Rocks: Competition between China, US reaches mine outside Vegas.
https://news3lv.com/news/local/battle-of-rocks-competition-between-china-us-reaches-mine-outside-vegas

The uses for rare earth are vast and the need for them unequivocal but more importantly we must consider that reliance on other nations for the strategic minerals could hamper U.S. defenses. This is a great opportunity for us because the U.S. Army plans to fund construction of rare earths processing facilities, this is part of an urgent push by Washington to secure domestic supply of the minerals used to make military weapons and electronics, according to a government document seen by Reuters. Click here to read the article at the source. 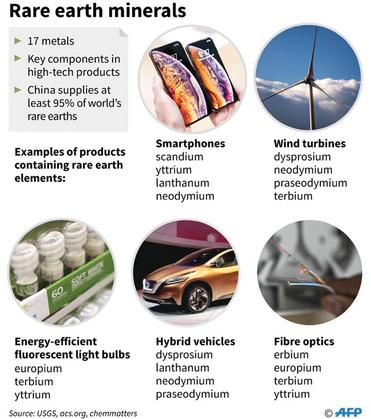 Recently, news channels have been buzzing about Rare Earths and Magnetites, this is really good news for Southern Nevada mining operations such as ours because both are present in our claims right next to MP Materials at the mountain pass located on the way from Las Vegas, NV to Los Angeles, CA.

Chinese companies have been the biggest buyers of overseas mining assets over the past year, in a concerted push to secure the metals and minerals required for the energy transition away from fossil fuels.

With more than $7bn worth of deals in 2018, according to Dealogic, Chinese groups are now increasingly targeting minerals needed for electric car batteries and clean energy technologies. This has led them to buy stakes in copper, cobalt and lithium assets in countries as far afield as the Democratic Republic of Congo, Serbia and Chile.

The buying spree is in contrast to previous overseas forays that largely focused on acquiring steelmaking iron ore assets, which led spending to hit $17bn at the height of the last commodity boom a decade earlier.

Their largest acquisition last year was the $4.1bn purchase of a 24 per cent stake in Chilean lithium miner SQM by China’s Tianqi Lithium.

This deal and others contrast with the more cautious approach by western mining companies such as Rio Tinto, Anglo American and BHP Billiton, which have resisted any large acquisitions reminiscent of that previous commodity boom that eventually led to $109bn of write-offs.

It is a bifurcation that could have profound implications for who controls future supply of critical metals, which are expected to see surging demand over the next decade as sales of electric cars increase.

“Who’s got their mitts on the fairest portion of the earth? It’s still Rio, Anglo American and BHP, but the current dynamic is making it harder and harder for the west to maintain that position in the face of an increasingly self-confident China,” said Paul Gait, analyst at Bernstein. 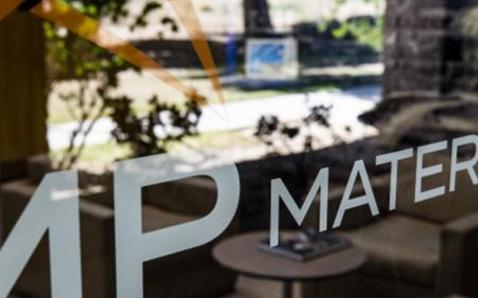